There are several ways to transmit the video signal from a camera to its destination:

This is simplest and most affordable one; the output signal from a camera is transmitted to destination through a physical medium and displayed on a monitor at the same frame rate (30 fps) and quality in which it was captured. Without any delay.

To send a video signal by a local network, it is necessary that this signal is digitized and then be sent in a packet format.

An ADC (Analog to Digital Converter) processor converts the analog video signal into bits, which are then transmitted via the network.

"A 2 Megapixel camera occupies a bandwidth of about 2 Mbps, because each pixel has one bit."

I've heard that phrase a lot, but it is far from true. It could be something close to it if the information of each image pixel was stored in one bit. But then each pixel would be displayed just  black (bit = 0) or white (bit = 1). Final result would be something like image below: 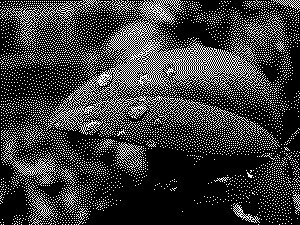 Standard RGB color consists of three colors: red (R), green (G) and blue (B). To get a close picture of the actual image, it was created the True Colors system - so named because it displays a number of colors close to what human eye sees.

If you go into any image processing software you will find something like this color palette, which is the True Color system:

Note that between left and right color palettes shown, each color ranged from 0, 0, 0 (black) to 255, 255, 255 (white). To have 256 different values ​​per color - remembering the lessons about binary systems - we have to use 8 bits of information per color, ie, to form True Color images, 24 bits of information per pixel are needed.

Windows True Color 32 bits If you get into the advanced properties of your Windows graphics card , you will see something like " True Color 32-bit ." It is that Windows uses the standard RGBA  plus the Alpha channel that defines the transparency of the image in 256 levels . Hence the 32-bit rather than 24.Therefore, to transmit an image from the 2 megapixel camera mentioned above:

It would require a bandwidth of 1.49 Gbps to convey the image of a single camera Full HD at 30fps!

If  camera had a resolution equivalent to an analog camera (D1) it would require a bandwidth of 271 Mbps, which is still too much.

Image recording It is not only to be transmitted via network images must be digitized and compressed. Even in an analog DVR, images are also digitized and compressed to be recorded and transmitted to a remote server via network. Bits and Bytes Data is transmitted  serially, one bit at a time, that's why transmission rate is expressed in bps (bits per second). For recording,  data is stored in bytes (1 byte = 8 bits). So it does not say "8 Terabits HD" but "1 Terabyte HD "For this reason, it is necessary to use a compression algorithm for the image to be compressed before being transmitted. To get an idea of how a compression algorithm works, read the article on H.265.

Depending on the desired quality, compressed images may be much smaller, the point of images from a 1 megapixel camera occupy only 2 Mbps bandwidth.

Now that analog image is digitized and compressed, it's ready to be transmitted. The most common protocols at the transport layer for image transmission via IP network are TCP and UDP. Video below gives a good idea about how a network operates.

TCP (Transmission Control Protocol) is the most suitable protocol for data transmission because it verifies if data was sent correctly, in proper sequence and without errors.

Before transmitting the packet, TCP assembles a header indicating packet's source and destination, its length and applies an algorithm to the data, which result will be included in the header as a checksum control.

At destination, packet is disassembled; same algorithm is applied to check whether any data was corrupted. Then a response is sent to the source stating whether another package can now be sent or if last packet must be retransmitted because it was received in error. The source does not send another packet until receiving last packet confirmation or until a timeout occurs. In the meantime, image frames captured by camera are being discarded, which explains why a camera captures and sends to network 30 fps, but at destination are arriving, for example, just 7 frames.

The main concern in TCP is not the speed of transmission, but data integrity. For these reasons it is not the most appropriate protocol for transmission of video streams.

UDP (User Datagram Protocol) is unreliable, is the teenage brother of TCP, done to transmit less sensitive data such as audio and video streamings.

Packets are transmitted only once and in sequence without having to wait for an acknowledgment to transmit the next packet and corrupted packets (that will only be detected if checksum is being used, which in UDP is optional) are simply discarded and transmitter side will not even know about the problem.

UDP's main concern is to transmit data with the highest possible performance.

- Video streaming over the network is a more complex, slower, and therefore more costly process, because a large investment in switches and servers is necessary for the process of packets assembly / disassembly / checking has a performance close to analog video;

- Analog video signal doesn't need to undergo any digitization or compression to be transmitted. Therefore, it is the most efficient and most economical of all options;

- For resolutions up to 2 megapixels, transmitting video signals via HD-CCTV is more efficient and even cheaper than using IP cameras;

- In all options except for TCP, every picture frame received is processed and shipped. In TCP, new image frames are discarded until destination process finishes verifying checksum and sends a confirmation authorizing the deployment of the next packet;

For IP cameras is better transmitting packets via UDP, which is more efficient than TCP for streaming videos;

For signaling, such as sending an alarm event detected by an IP camera or a DVR sensor, it is better to use TCP, because it can ensure that event information will reach its destination.