As I already had commented on Video Signal Transmission, there are several ways to transmit the video signal from a camera to its destination, being fiber optics one of these ways.

Coaxial and twisted pair cables transmit the video signal by the passage of electrons in metallic wires, preferably copper .

Fiber optics uses glass as a transmission medium . Video signal is converted into light pulses to be sent via fiberglass cables made ​​at much greater distances than those achieved in metallic cables.

RefractionTo better understand what refraction is, observe a pencil in a glass of water: Pencil will look broken. Who enjoy fishing knows, also due to refraction, fishes are not exactly where we see them. 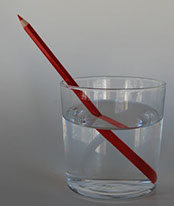 Fiber optics uses basic principles of physics on the reflection and refraction of light.

As we learned in high school, in optics classes, when light passes through two bodies of different densities, it undergoes refraction and / or reflection, that is a part of the light passes to the second body , but suffers refraction, and the other part is reflected as in a mirror.

To take advantage of these principles, optical fiber is composed of a transparent clear glass core surrounded by a material with lower refractive index.

And it is this difference that causes light beam undergoes refraction or reflection when it reaches the junction between core and cover that surrounds it.

In order to enjoy 100 % of the light beam being transmitted, it must undergo total internal reflection, without any refraction.

But how to achieve this ?

There is an certain angle, called critical angle, where from it all incident light will be totally reflected.

As can be seen in the figure below, from left to right , the first two light rays suffer refraction overall because they are below critical angle. Last ray of light undergoes total reflection because it had passed the critical angle.

Thus, any ray of light that reaches the boundary between the two concentric surfaces of  optical fiber will be reflected, being directed to the opposite surface, where it will be reflected again. Through these successive reflections, light beam will cover all the fiber extension until it reaches the other end. 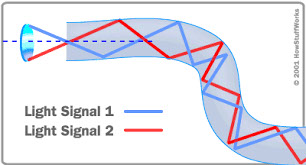 The above diagram illustrates the principle of transmission for the calling multi-mode fiber optics. It is so called because it allows the passage of multiple beams of light.

This type of fiber optics was created in the 1970s, and the first installation took place in Chicago, USA , in 1976 .

Even being so thin, this core is still thicker than the light beams transmitted through it to end up being reflected once they reach their walls.

Of course, this reflection is not ideal, because it ends up attenuating the transmitted signal, reducing its scope .

To avoid the above problem, an even thinner fiber optics has been developed, with only 8 microns, called single-mode.

In a single-mode fiber, a single beam of light - hence the name single-mode - is directly guided to the other end without any reflection, allowing much greater distances to be achieved.

Multi-mode fiber optics are offered in two types of core, with 50 or 62.5 µm diameter. But despite having cores with different thicknesses, in all of them, including the single-mode type, the glass cover that surrounds the core  (cladding)  has the same external diameter : 125 µm for all 3 models.

In addition to the core and cover, fibers optics also have other layers:

Strengthening fibers: To support traction. Usually made of aramid, prevent fiber from being damaged when passed through a conduit.

Cable jacket: It is the outer cover, to protect the whole cable.

Installation: Being much more thin, single-mode fiber requires greater precision at the seams and connectorization .

Obviously, you can't connect a fiber optic directly into the camera or DVR. Special converters should be used for that.

For CCTV purposes, these converters can be:

- Multiple converters: They concentrate up to 16 video channels and data on a single fiber. In this way, it can send video signal from 16 cameras signal at a distant building to a DVR that is in another building using a single fiber optics.

All fiber optics  should be connectorized in order to be used. There are several types of connectors, which should be consistent with those found in converters that you want to use.

Most common types are:

Short for Straight Tip Connector. It was developed by AT & T. Its socket, bayonet type connection, resembles a BNC connector. It 's the most widely used in CCTV .

For being a screw connection, it is often used in environments subject to vibration . For many years, it was the most popular connector.

It is the newest one, used for applications where you need high speed.

At Part 2 we'll look at the advantages and disadvantages of using fiber optics instead of metallic cable.

This article was written with the collaboration of Fiberwan